Richard Cory and his brother were Cardiff coal merchants who made a fortune selling their product in the major London market. In 1872 Richard Cory purchased Wembury’s Langdon Estate, which was to remain in the family until 1927. Wealth meant that the family was well connected in late-19th century society, and socially prominent guests were not at all unusual. These photographs of the Cory family, some of their guests and their staff, were taken in the 1880s and early 1890s.

Mr Richard Cory on horseback, with Mr Pattington the coachman and the dog Venus, outside the south front door (the carriage door) 1881 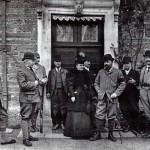 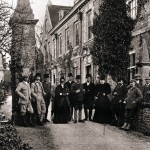 A shooting party positioned between the easternmost set of gate piers on the south carriage way of Langdon Court. The Prince Wales is towards the right, in a dark suit and leaning on a wall. Mrs Cory is next to him. Richard Cory is in the centre, with one hand inside his jacket. 1890 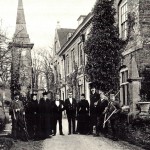 The maids and loaders for the 1890 shooting party, photographed in the same location as the guests. No names are recorded! 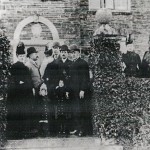 L to R: Alice Phillips (step daughter of Archdeacon Wilkinson of Totnes); Bessie Florence Cory; Edith Frances Wright Cory ('Diney'), and Edith Morton, the governess. They are standing in the Elizabethan garden, at the foot of the steps leading to the terrace. 1894

The family’s four wheeled dog cart outside the east front of Langdon Court. Mr Pattington is the coachman, with passengers Frank and Mary Jervis; Mrs Coulthard; Colonel Gore; Major Nepean and Richard Cory. Mr Bryant the groom, stands behind. The horses are ‘Duke’ and ‘Emperor’. 1892 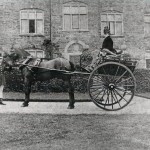 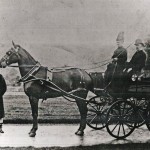 Richard Cory and his second wife, Bessie Cory, with the four-wheeled dog cart and horse. The groom, in livery and great coat, is John Bryant. 1880s 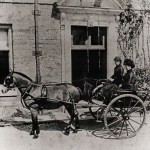 Mrs Bessie Buchan with her stepmother, Mrs Bessie Frances Cory, in the dog cart outside the south front door (the carriage door) 1881 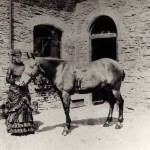 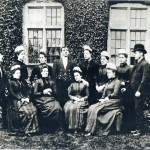 Members of the staff in their best clothes especially for a group photograph 1889. The windows behind them are those of the pantry.