Although the precise date when the landscape park at Langdon was laid out is unknown, it was certainly flourishing by the mid-19th century. By 2006, however, many of the original trees were showing serious signs of decay. These pictures illustrate the park’s development and decline, as well as a replanting project undertaken by local organisations in 2007.

The set as a whole is designed to complement our publication Replanting Langdon’s Landscape Park. This provides considerably more detail and is downloadable from our publications page. 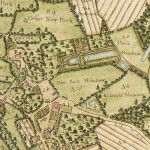 Langdon before the landscape park was created. On this extract from the Calmady Map of 1789, Langdon Court is the pink rectangle; north-east of the Court there is no sign of the landscape park. The area which was to become the park was split between the Fir Garden, Deer Park Meadow and Rylands Meadow. The wood in the south-east corner of the map would have provided a backdrop to the park once it was established. 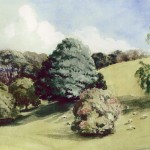 Langdon’s landscape park in 1857. Less than 70 years after the Calmady map demonstrated that the landscape park had yet to be created, this watercolour by Gertrude Calmady shows it with a substantial collection of mature trees. The view shown looks down the valley towards the coast; Langdon Court is to the right overlooking the valley. 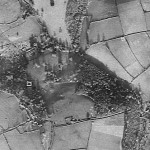 The landscape park in 1946. Langdon Court is the light rectangle. The park is immediately to the east (ie to the right of the house). A substantial number of mature trees can be seen in the open ground largely surrounded by woodland. 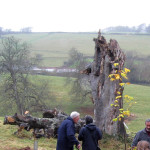 Just one example of the trees' decay. The grey-haired gentleman in the foreground is John Squire, for many years a Parish and District Councillor. He is talking to Anne Tolley, a member of Wembury Local History Society Committee. The photograph was taken on the day of replanting, November 26th, 2007. 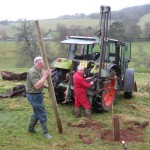 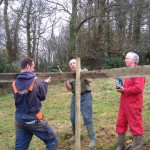 The MacBean brothers (facing the camera), erecting the protective fences 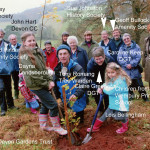 The replanting ceremony. Tony Romang, in the foreground, was at the time the parish tree warden and designed and organised the replanting project. The Devon Gardens' Trust, represented by Claire Greener, funded the purchase of timber for the protective fences. Wembury Amenity Society, represented by David Pinder, purchased the trees. 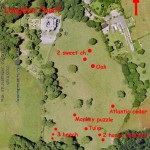 Location and types of tree planted