In the late nineteenth and early twentieth centuries, Wembury had two traditional population concentrations: Down Thomas in the west and Knighton plus West Wembury in the east.

Knighton and West Wembury comprised a straggling development strung out along a lane which eventually wound its way to the beach. Cottages, farmsteads, a forge, the pub and several community buildings made up most of the settlement. This gallery begins by setting what was essentially a rather basic linear village in its agricultural context, and then highlights a selection of views, starting at the top of today’s Knighton Hill and working down the lane to West Wembury.

Many of the buildings shown here can still be identified today; most line what is now the greatly altered main road from Plymouth to the beach. 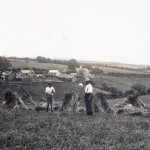 Harvest time on Traine Down. West Wembury, a straggling line of buildings along the lane, can be seen in the background. The last building on the right is the village school. 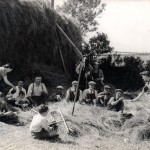 Loading the hay wagon at Traine Farm in 1942. The horse ‘Lion’ belongs to Fred Rowland, the owner of Traine Farm, who is directing the work. The hay would later be hand pitched to form a rick for feeding the cattle through the winter. The group includes Ken Wood, Bob Penwill, Ralph Avent, Doris Congdon, Sam and Bill Gibson, John Moses, Charlie Brook and Bert Wood. 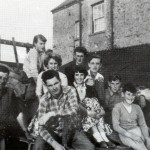 Harvest at Traine Farm, probably in August 1956. Fred Rowland (on the right) and Bob Penwill (left) are about to set out to collect the sacks of barley left in the field by the combine harvester. There is no shortage of helpers. Identified in the photograph are Susan, Jackie and Robert Rowland, Angela and Roger Grant, Adrian Pate and Keith Fretsome. 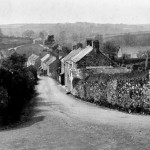 Knighton Hill, probably between 1922 and 1928. The turn to the right is the current sharp bend on the main road from Plymouth. The cottages on the right were, in the large majority of cases, rented by agricultural labourers. 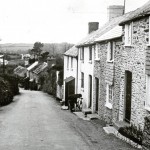 A closer view of the Knighton cottages. Family size varied, and some were small. But it was common for each cottage to house between 7 and 10 people. 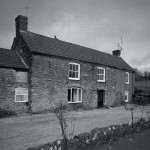 Knighton Farmhouse in the mid-1980s. Owned in the early 1950s by Ben Clifton, in 1953 it was bought by Henry (later Sir Henry) Studholme when the Cliftons moved to Eggbuckland. Henry Studholme put in a farm manager, Mr Stevenson, who remained there until the late 1980s. The picture shows the farmhouse just before the end of Mr Stevenson’s time as tenant. Peter Lugar recalls the farm had a specially constructed sheep dip, to which other farmers brought their animals. When this was first used the headmistress of the school, Mrs Algate, was asked to calculate the dilution of the chemical to ensure there were no dire consequences! 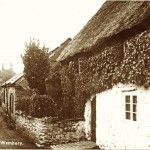 The Old Smithy and Cottage in the 1920s. Dated by English Heritage to the early 19th century, the smithy was awarded Grade II listed status in 1999. The blacksmith was a key member of the rural economy, and in this part of Wembury this role was fulfilled by successive members of the Coleman family. Little short of a dynasty, the Colemans handed the business down through the generations throughout the 19th century and well into the 20th. From the 1881 census it is clear that the family was significantly more prosperous than was typical, employing as they did two servants. Despite this prosperity, their cottage (foreground) was far from palatial, yet at times housed at ten or more occupants. By the time the smithy was listed both it and the cottage were deteriorating, but both were renovated in 2012 / 13 by Pam and Tony Bowring. 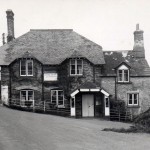 The Jubilee Inn, now the Odd Wheel, as it was in the late 1940s, and in reality little different to its appearance in 1900. The pub provided a focus in the eastern part of the parish, and for several decades in the mid-twentieth century was run by members of the Perring family. The left hand edge of the roof shows signs of repair due to it being damaged by a cattle lorry attempting to get down to West Wembury Farm. The road was very narrow until widening in 1958, as can be seen by the hedge on the extreme left of the photograph. 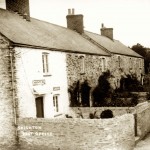 These nineteenth-century employees’ cottages in Traine Road (near the Odd Wheel pub) were built on a former orchard for Mr Ralph Dawson of Wembury House. The 1881 census shows that, in contrast to the nearby cottages on Knighton Hill, the families living here were not agricultural. For example, one family head was a groom, another a carrier and a third a Chelsea Pensioner. In the early 20th century the nearest cottage was run for many years as the Knighton Post Office by Miss Minnie Perring, later Mrs Brown. The business was based in the living room, which also contained the black-lead range for cooking. The back room contained the kitchen plus a walk-in larder and doubled as a dining room. The front bedroom upstairs was made into a parlour, while Mr and Mrs Brown slept in the back bedroom. The children, meanwhile, used a wooden hut in the corner of the Browns’ field in front of the cottages. This hut was painted maroon and was still there in the 1950s – but was now a chicken house. 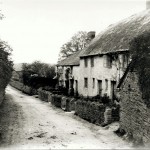 West Wembury cottages in 1909. Like the Knighton Hill cottages, these were the rented homes of agricultural workers and their families. The left-hand pair are quite recognisable today, although they have had alterations such as changes to door positions and windows. The right-hand pair have changed dramatically, having been rebuilt in 1910 in the Edwardian style. The changes included a raised roofline and the loss of the thatched roofs; alterations to the arrangement and style of the windows and doors; and the addition of chimneys on the gable ends. Reflecting the rebuild’s timing, the left-hand one of the pair is named “Coronation Cottage” in honour of King George V whose Coronation took place that year. Meanwhile the lane, constrained by the cottages on the right and the wall on the left, is exactly the same width as today. 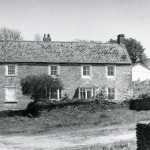 West Wembury farmhouse and yard, 1980. The house is Grade II listed, and is a very substantial stone-built house of the 18th century, with a slate-hung front elevation, granite quoins, and 19th-century sash windows. This was a working farm for much of the twentieth century, but in the 1960s and 70s its land was almost all developed as today’s Wembury was built. At this point the farmstead fell into disuse – as can be seen from the weeds in the yard and the absence of farm implements and livestock. An equivalent picture of the working farm can be seen in this website’s 'Langdon Estate in 1927' photo gallery. The view is through the farmyard gateway, through which the cows were led twice daily to and from their pasture. The gateway is now blocked off, and the growth of trees and shrubs has almost obscured the yard and farmhouse from view. 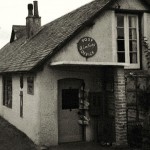 The building which for many years housed the post office was originally part of West Wembury farmstead, the rest of which stood immediately across the road. At one point the post office was on the upper floor, with the counter extending across the upstairs window and the teller standing with his back to it. Climbing the stairs was not popular with customers, especially the elderly. By the time this photo was taken in 1961 the owners (Dennis and Lena Baskerville) had moved it downstairs and put an associated shop in a former kitchen. The stamp machine just visible in the porch was another of their improvements. Today (2013) the building is occupied by a beauty salon - quite an indicator of change in the rural economy! – while the village post office and store are in an attached single-storey building to the right. 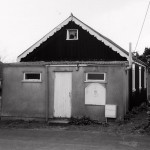 The Parish Room, also known as the Church Room, was paid for by the Cory family, owners of the Langdon Estate, in the 1900s. Although small, it provided a focus for meetings for those living in the eastern part of the parish. This role lasted for many decades, even though the first village hall was built soon after World War I, and was itself replaced by the War Memorial Hall in the early 1950s. Originally the parish room had no water supply, but more than half a century after it was built this was corrected and a kitchen and toilets were added. In this photo, the light-coloured front of the hall is a small extension in which the toilets were housed. Eventually declared unsafe, the Parish Room was demolished in 2013. 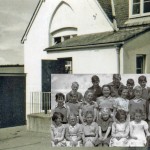 The final building in West Wembury was the original school. Although it played such an important role in the community, there are very few photographs of the building. Built of granite, by the time this picture was taken in the 1950s it had been rendered. The glimpse of Traine Down to the left of the picture hints at the school's attractive location. The inset photograph is a school photo from the early 1950s. The children would have rushed through the door behind to play in this yard.