Bovisand, in north west Wembury, has had several different lives. As an outlier of the agricultural Kitley Estate in the early 19th century, its commanding views down a sweeping valley to Plymouth Sound made it an excellent site for Bovisand Lodge, one of the parish’s grand houses. With the country facing a perceived threat from France, the second half of the 19th century saw defence rise to a dominant role lasting up to WWII. But the early 20th century also witnessed a switch towards tourism taking advantage of Bovisand’s attractive beach; and it is tourism which dominates today in the form of a holiday park. 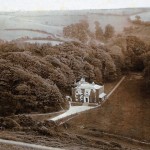 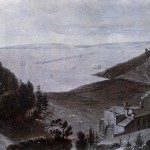 A view down the valley to Plymouth Sound. The site's attractions for a fine house are evident. The Lodge is in the foreground, while the Plymouth breakwater can be seen in the distance. With respect to dating, the vessels are all sailing ships; no steam power is evident. Also, the breakwater appears to be not quite complete. This suggests the picture was drawn not long before 1841. 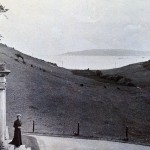 A second view down the valley from the Lodge. The ladies are standing outside the main door on the north side of the house.Their dresses suggest a late 19th or early 20th century date. The Plymouth breakwater, completed many years before in1841,can again be seen in the Sound. 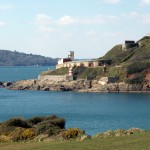 Staddon Point forms the northern side of Bovisand Bay. It's significance for defence was its commanding position overlooking the eastern entrance to Plymouth Sound. The first defensive structure was Staddon Battery (1845), which can be seen climbing up the cliff. Fort Bovisand (begun 1861; completed 1869) lies below and is now listed Grade II*. Its 23 granite casement are arranged in an arc to fire in a broad sweep, and it is the best preserved of Plymouth's coastal batteries. Updated in fire power at various times, the fort was still in commission in WWII. The concrete observation towers above the casements are WWII in age and rare. Decommissioned in 1956, the fort was later a diving school, but is now unused. 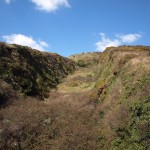 An impressive dry defensive ditch which rises up the cliff from Fort Bovisand towards Staddon Heights. Any enemy soldiers entering the ditch would have been exposed to fire from the loopholes in the wall at the top. 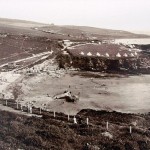 Bovisand beach in the early 20th century. A café stands in the left foreground. Bathers dot the beach. There are two rows of changing huts on the far side of the beach. And the conical tents are obviously a temporary camp. The seeds of Bovisand's present tourism were sown at this time.