Although the 20th century brought significant change, in two respects its impact could have been far more dramatic.

House building in the countryside was actually quite restrained compared with the visions entertained by the estate agents responsible for masterminding the 1927 Langdon Estate sale. Browsing the sale catalogue quickly reveals that its authors took every opportunity to highlight development opportunities offered by the various lots, especially on the coast, but also inland.

These ideas were not simply pipedreams. In the 1930s there were well-documented plans to build more than 200 houses on Wembury Point; and these plans included the construction of a new road eastwards from the Point to Wembury Beach. A highly likely consequence of this road would have been complete development of the fields through which it passed.

Construction on this scale would have produced one of the largest 20th-century coastal developments in South Devon. And the fact that it did not materialise owed nothing to planning controls, which were extremely weak until 1947. Instead, speculative development was blocked by a combination of the building moratorium imposed in World War II and the War Department’s takeover of Wembury Point for defence purposes. Appalling though the war was, for Wembury its protective consequences were far reaching.

The port that never was 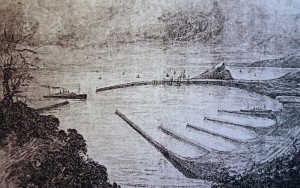 An artist’s impression of the proposed port

The failure of grandiose housing plans was not Wembury’s first escape from 20th century development. By the late 19th century Plymouth’s commercial port was seriously outdated – to the extent that liners of any size had to anchor in Plymouth Sound and use tenders to land or embark passengers or goods. When attempts to resolve this problem by building new port facilities in Plymouth’s Cattewater were blocked by the navy, attention switched to Wembury Bay.

In 1908 a private company published plans to build here the country’s largest port. Stretching from the River Yealm in the east to Wembury Point in the west, and protected by breakwaters stretching well out to sea, this port would have totally transformed the bay. However, despite strong support from Plymouth’s commercial and political elite, and despite a complete absence of local opposition, when the company applied in 1909 for the necessary Act of Parliament to permit the project it was firmly refused by a House of Lords vetting committee. Under-capitalisation and the lack of backing by a major railway company were its Achilles’ heels.

Experience of port growth elsewhere demonstrates that, had the bid been successful, the Wembury of today would simply not exist. Complete development of the bay would have been mirrored on land by unchecked urbanisation and, most probably, absorption into Plymouth.

Back to About Wembury